Red Hat’s Adam Jackson, project owner for the X.Org graphical and windowing system still widely used on Linux, said the project has been abandoned “to the extent that that means using it to actually control the display, and not just keep X apps running.”

Jackson’s post confirms suspicions raised a week ago by Intel engineer Daniel Vetter, who said in a discussion about enabling a new feature: “The main worry I have is that xserver is abandonware without even regular releases from the main branch. That’s why we had to blacklist X. Without someone caring I think there’s just largely downsides to enabling features.”

This was picked up by Linux watcher Michael Larabel, who noted that “the last major release of the X.Org server was in May 2018… don’t expect the long-awaited X.Org Server 1.21 to actually be released anytime soon.”

The project is not technically abandoned – the last code merge was mere hours ago at the time of writing – and Jackson observed in a comment on his post that “with my red hat on, I’m already on the hook for supporting the xfree86 code until RHEL8 goes EOL anyway, so I’m probably going to be writing and reviewing bugfixes there no matter what I do.” 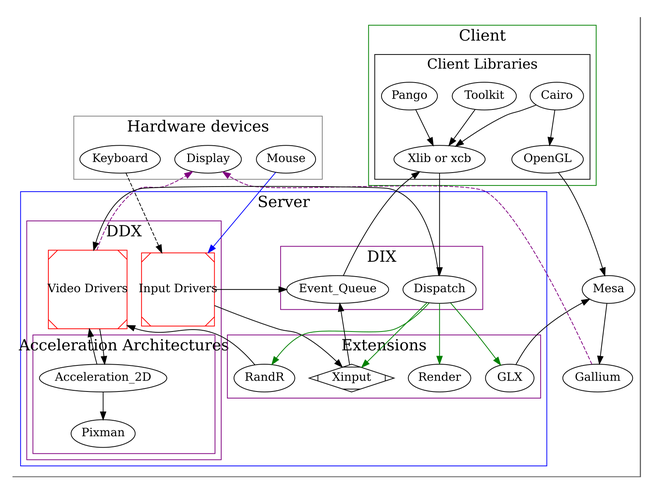 Diagram of the X server architecture

X.Org is the reference implementation of the X Window system first released in June 1984 by its author Robert W Scheifler at Massachusetts Institute of Technology (MIT); it was, as you would expect, the successor to the W windowing system developed at Stanford University – so named because it ran on an OS called V. X version 11 (or X11) came out in September 1987, which is why Jackson wrote: “X works extremely well for what it is, but what it is is deeply flawed. There’s no shame in that, it’s 33 years old and still relevant, I wish more software worked so well on that kind of time frame. But using it to drive your display hardware and multiplex your input devices is choosing to make your life worse.”

Problems with X include security issues (lack of isolation between windows) and that it gets in the way of graphics acceleration. “Most of the complexity that the X server used to handle is now available in the kernel or self-contained libraries (KMS, evdev, mesa, fontconfig, freetype, cairo, Qt, etc).

“In general, the X server is now just a middle man that introduces an extra step between applications and the compositor and an extra step between the compositor and the hardware,” said the documentation for Wayland, the protocol that replaces X in modern distros. Some distros still use X.Org by default, including Ubuntu. Wayland is also included, but users have to specifically select it.

Jackson said the future of X server is as “an application compatibility layer”, though he also said that having been maintaining X “for nearly the whole of [his] professional career” he is “completely burnt out on that on its own merits, let alone doing that and also being release manager and reviewer of last resort.”

He also mentioned related projects that he says are worthwhile such as Xwayland (X clients under Wayland), XWin (X Server on Cygwin, a Unix-like environment on Windows), and Xvnc (X applications via a remove VNC viewer).

When a response to Jackson’s post complained about issues with Wayland – such as lack of stability, poor compatibility with Nvidia hardware, lack of extension APIs – the maintainer said that keeping X server going was part of the problem. “I’m of the opinion that keeping xfree86 alive as a viable alternative since Wayland started getting real traction in 2010ish is part of the reason those are still issues, time and effort that could have gone into Wayland has been diverted into xfree86,” he said.

The hope then is that publicly announcing the end of the reliable but ancient X.Org server will stimulate greater investment in Wayland, using Xwayland for the huge legacy of existing X11 applications. ®